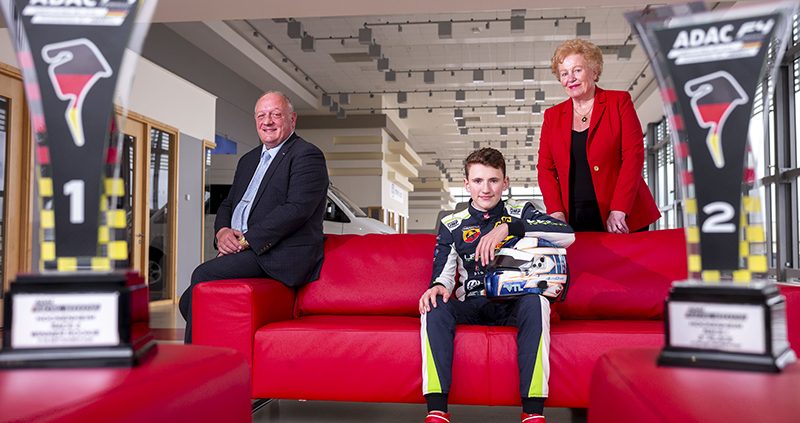 The future of Irish motorsport is looking very promising; Alex Dunne (15) is making a big impression on his new team US Racing, headed up by Ralf Schumacher and Gerhard Ungar. And supporting him on his ambitions are the Harris Group, who has committed to sponsoring Alex.

The teenager from Offaly made his debut for US Racing in ADAC Formula 4 at the famous German racing circuit, Hockenheim. Finishing second in two of his races, Alex also posted the fastest lap to finish the weekend as the number one rookie.

At the sponsorship announcement, Denise Harris, CEO of Harris Group said: “For such a young man, Alex has the composure and confidence of someone with much more experience. We have been closely following Alex’s racing career over the past few years and are delighted to be part of his success. However, we know the best is yet to come and we are committed to supporting Alex in his endeavours to reach Formula 1. We are really looking forward to watching him race over the next few seasons as he continues to make his mark in international motorsport”.

In his short career, Alex has already made a name for himself, since his debut in the Irish Karting Championship in 2014. Since then, he has been no stranger to the podium with several wins in Ireland, UK and across Europe. 2021 has seen Alex take on Formula 4, initially racing in Spain and now Germany with US Racing.

Commenting on what the backing from Harris Group means, Alex said: “Joining a team like US Racing wouldn’t be possible without support like this from sponsors such as the Harris Group and I really appreciate their belief in me. Motor racing is something that I love and is in my blood. I’ve been driving karts since I was nine and really enjoy competing. Being able to race with a team like US Racing is a fantastic opportunity. I’ve got a great team behind me and I am learning every time I sit in the car.”

Alex’s next race weekends take place on October 22nd to 24th, at Hockenheim and November 5th to 7th at the Nürburgring. Following that, Alex will begin testing and preparation for the 2022 season.

Harris Group is Ireland’s pre-eminent importer and distributor of commercial vehicles. Founded in 1961 by Pino Harris, it is best known for its commercial vehicle brands that include Isuzu, Maxus, Hino and Higer. The company relocated in 2019 to a significant new business campus on Dublin’s Naas Rd. featuring a training school, offices and extensive parts, workshop and after-sales facilities.

Harris Group has an ever-expanding range of electric vehicles from LCVs to buses. The current offering includes the road-ready Maxus e DELIVER 3 and Maxus e DELIVER 9 electric vans and the Higer STEED, a 100% electric and metro-ready bus. The newest arrival is the Higer Azure. This 12-metre, 100% electric bus has ground-breaking technology that makes it even greener than ever before, with an industry leading range of over 375km on a single charge.

Alex Dunne back in German Formula 4 action
Scroll to top