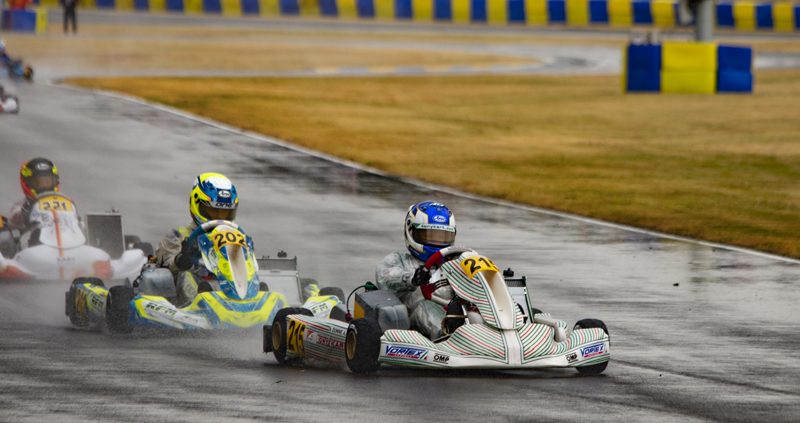 Alex Dunne completed his 2019 European OK-Junior Karting Championship campaign with another highly competitive performance at Le Mans, France, over the weekend of July 19th to 21st. Ireland’s top International Kart Racer once again showed great pace as he ran at the front throughout the event, to pick up another heat win and two more podium finishes, before being heartbreakingly pushed off the track on the last lap of the final. Despite his non-finish at Le Mans the Clonbullogue youngster still collected an impressive seventh place in the final European Championship standings.

The Le Mans weekend started well with Alex just over a tenth of a second off the fastest time in qualifying to give him a second row start for all five of his heats. Getting away strongly in his first race the Newbridge College student continued his strong form and was challenging for the top spot on lap two when the leader moved across on him taking both drivers out of the race and effectively ending Alex’s hopes of lifting the title, as the youngster explains. “I went into the weekend with the possibility of winning the Championship but I really needed to score as many points in qualifying as I could and start on the front two rows of the final to be in with a chance. The incident in heat one reduced my chances of scoring points during qualifying and meant a lower starting position for the final race leaving second place as the best I could achieve.”

Starting race two the Irish driver knew he needed a strong finish to make up for the opening heat and made short work of moving up to second place before taking the lead at half distance and holding on for his fifth heat win of the year. Race three took place on a very wet track and with Alex knowing he could not afford another non-finish, he took a steady approach to finish third, while a number of his rivals crashed out. Heat four saw Alex straight into the lead when the flag dropped, but he was caught and bumped down the order at half distance before fighting back strongly to finish a very close second.

Sunday mornings fifth heat saw Alex take the decision to start on used tyres, saving his last new set for the final. Initially this put him down the order as the drivers on new tyres battled to grab the remaining places in the final. Having run as low as eighth, Alex then drove a mature race to climb back to fourth and clinch twelfth on the grid for the final, a fantastic achievement considering his heat one non-finish.

With the final being almost double the length of the heats, Alex stayed out of trouble in the early laps, dropping back to fourteenth, before picking his rivals off one by one and tagging onto the back of the group fighting for fourth place going into the final three laps. As the Offaly youngster made his move on the final lap he was pushed off by an overly defensive move by his rival, ending his 2019 championship assault before the chequered flag.

Despite the disappointment of his non-finish in the final, Alex left the French round very happy with his progress across the season. A superb second place at round two, along with a tally of five heat wins among thirteen podium finishes, marked the Irish youngster as one of the strongest performers in the series and kept him in contention at the top of the championship standings right up till his exit from the Le Mans final.

Speaking after the completion of the European series Alex said “We had great pace once again this weekend and I was delighted to pick up another race win and three more podiums. I knew it was going to be difficult once I had the non-finish in race one, but my performances after that showed just what could have been with a little more luck. Crashing out of the final due to someone else’s mistake was disappointing but overall the weekend has left me feeling good about my chances for the remaining races this year including the World Championship.”

With the European Championship now complete Alex Dunne will turn his focus towards the build up to the OK-Junior World Championship which takes place in Alahärmä, Finland in early September.